Context.  In the fall of 1837, an abolitionist newspaper editor named Elijah Lovejoy was murdered by a pro-slavery mob while trying to defend himself and his printing presses near Alton, Illinois. The murder riveted and polarized the nation, and although Abraham Lincoln did not mention Lovejoy by name in his speech to the Young Men’s Lyceum in January 1838, most historians consider it obvious that he had the incident in mind as he deplored mob violence and urged Americans to uphold their faith in law and republican institutions. In the excerpts from the speech below, Lincoln focused on the threat from what he termed a “Towering genius” who might disturb the successful American experiment in self-government because he desired a new form of glory. Lincoln ominously warned that such a figure might assert himself by “emancipating slaves” or “enslaving free men.” Lincoln was merely in his late twenties at that time, a young, novice attorney and state legislator, still unmarried and renting a room above a store in town. (By Matthew Pinsker)

“That our government should have been maintained….” 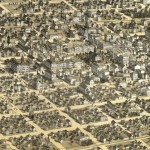 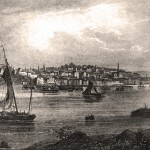 Josiah Holbrook, American Lyceum, or Society for the Improvement of Schools and Useful Knowledge, 1829

“It will be seen from the following…,” Wisconsin Territorial Gazette and Burlington Advertiser, October 12, 1837

Elijah Lovejoy, Letter to the Editor of Emancipator, The Liberator, November 10, 1837

“The day that this article appeared, Lincoln gave a speech to the Young Men’s Lyceum in Springfield. Titled ‘The Perpetuation of Our Political Institutions,’ it focused primarily on recent outbreaks of mob violence, which Lincoln roundly condemned, adding his voice to the Illinois Whig chorus denouncing the upsurge in riots and lynching. (A year earlier he had attacked ‘that lawless and mobocratic spirit…which is already abroad in the land.’) … In the midst of his ostensibly nonpartisan address, Lincoln slyly alluded to the danger posed by a coming Caesar, a man ‘of ambition and talents’ who would ruthlessly pursue fame and power, overthrowing democratic institutions to achieve his ends. Rhetorically, Lincoln asked if such a person would be content to follow traditional paths to distinction: … Since the rules of the Lyceum forbade political speeches, Lincoln could not directly attack Douglas, but because his audience was politically aware, he could assume that they had read ‘Conservative No.2’ earlier in the day and thus understood that Douglas was the target of his remarks about the coming Caesar. It was evidently a clever maneuver to circumvent the ban on partisanship at the Lyceum.”

“The lecture was written for yet another great agency of American oratory, the town lyceum (in this case, the Young Men’s Lyceum of Springfield, one of a nationwide network of 3,000 such speech-making societies begun by Josiah Holbrook in 1826), and Lincoln took as his topic exactly the question of how to guarantee “The Perpetuation of our Political Institutions.” His answer to the temptations of power was not an appeal to Jeffersonian virtue, but to the countervailing authority of law. Any glance around the American scene would reveal ‘accounts of outrages committed by mobs,’ leading to disgust across the republic with ‘the operation of this mobocratic spirit’ and finally a resort to a dictator who, like Napoleon, would promise order but deliver despotism. The only preventative was for ‘every lover of liberty’ to ‘swear by the blood of the Revolution, never to violate in the least particular, the laws of the country; and never to tolerate their violation by others.'”

“Lincoln began writing his historical drama in his much-remarked Lyceum Address delivered in Springfield in January of 1838. At the time, he was twenty-eight and had little reason to suspect, despite the distance he had already traveled from his hardscrabble days as a farm boy on the middle border, that he would become a central figure in his own story. The subject of Lincoln’s speech was how and whether the extraordinary political institutions of the United States could be sustained in the face of challenges of a different sort to the next generation of Americans. As James Russell Lowell had written, ‘It is only first-rate events that call for and mould first-rate characters.’ … In Lincoln’s rendering of these themes in the Lyceum speech, the sons of the Founders – his generation – were denied the opportunities for greatness afforded their sanctified fathers who fought the American Revolution and then wrote the Declaration of Independence and the Constitution. The heroic Founders had taken possession of the land and built ‘a political edifice of liberty and equal rights.’ They sought immortality through acts of creation. ‘If they succeeded, they were to be immortalized; their names were to be transferred to counties and cities, and rivers and mountains; and to be revered and sung and toasted through all time..They succeeded.'”

…That our government should have been maintained in its original form from its establishment until now, is not much to be wondered at. It had many props to support it through that period, which now are decayed, and crumbled away. Through that period, it was felt by all, to be an undecided experiment; now, it is understood to be a successful one. Then, all that sought celebrity and fame, and distinction, expected to find them in the success of that experiment. Their all was staked upon it:—their destiny was inseparablylinked with it. Their ambition aspired to display before an admiring world, a practical demonstration of the truth of a proposition, which had hitherto been considered, at best no better, than problematical; namely, the capability of a people to govern themselves. If they succeeded, they were to be immortalized; their names were to be transferred to counties and cities, and rivers and mountains; and to be revered and sung, and toasted through all time. If they failed, they were to be called knaves and fools, and fanatics for a fleeting hour; then to sink and be forgotten.
They succeeded. The experiment is successful; and thousands have won their deathless names in making it so. But the game is caught; and I believe it is true, that with the catching, end the pleasures of the chase. This field of glory is harvested, and the crop is already appropriated. But new reapers will arise, and they, too, will seek a field. It is to deny, what the history of the world tells us is true, to suppose that men of ambition and talents will not continue to spring up amongst us. And, when they do, they will as naturally seek the gratification of their ruling passion, as others have so done before them.
The question then, is, can that gratification be found in supporting and maintaining an edifice that has been erected by others? Most certainly it cannot. Many great and good men sufficiently qualified for any task they should undertake, may ever be found, whose ambition would aspire to nothing beyond a seat in Congress, a gubernatorial or a presidential chair; but such belong not to the family of the lion, or the tribe of the eagle. What! think you these places would satisfy an Alexander, a Caesar, or a Napoleon? Never! Towering genius disdains a beaten path. It seeks regions hitherto unexplored. It sees no distinction in adding story to story, upon the monuments of fame, erected to the memory of others. It denies that it is glory enough to serve under any chief. It scorns to tread in the footsteps of any predecessor, however illustrious. It thirsts and burns for distinction; and, if possible, it will have it, whether at the expense of emancipating slaves, or enslaving freemen. Is it unreasonable then to expect, that some man possessed of the loftiest genius, coupled with ambition sufficient to push it to its utmost stretch, will at some time, spring up among us? And when such a one does, it will require the people to be united with each other, attached to the government and laws, and generally intelligent, to successfully frustrate his designs.
Distinction will be his paramount object; and although he would as willingly, perhaps more so, acquire it by doing good as harm; yet, that opportunity being past, and nothing left to be done in the way of building up, he would set boldly to the task of pulling down.
Tagged with: Ambition, Antebellum, Public, Rule of Law, Speech, Violence
Posted in The Railsplitter
Lincoln’s Writings
Understanding Lincoln Online Course