Context.  Abraham Lincoln was twenty-three-years-old and working as a clerk in a store in the small village of New Salem, Illinois (situated about 20 miles north of Springfield along the Sangamo or Sangamon River) when he announced himself in 1832 as a candidate for the Illinois state house of representatives. Lincoln competed against twelve other candidates for four at-large seats. He finished eighth in the August election, falling short of victory by only about 150 votes. His well-crafted campaign statement from March, which detailed his policy positions on issues such as river improvements, may have contributed to what was a reasonably strong showing for someone who had only been living in the district for less than a year. (By Matthew Pinsker)

“To the People of Sangamo County….” 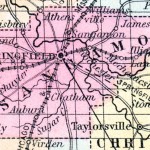 “At his friends’ urging, Lincoln in March 1832 announced himself a candidate for the state legislature. The move was another demonstration of the young man’s supreme self-confidence, his belief that he was at least the equal, if not the superior, of any man he ever met. To be sure, the post he was seeking was not an elevated one … Nevertheless, Lincoln’s decision to announce himself a candidate for the state legislature in March 1832 was a revealing one. Less than a year earlier he had been, in his own words, a ‘friendless, uneducated, penniless boy, working on a flatboat – at ten dollars per month.’ … Other candidates had influential politicians present their names to the electorate, but Lincoln, lacking such support, appealed directly to the public in an announcement published in Springfield’s Sangamo Journal. In drafting and revising it, he probably had some assistance form John McNeil, the storekeeper, and possibly from schoolmaster Mentor Graham, and they may have been responsible for its somewhat orotund quality … In a concluding paragraph Lincoln spoke for himself, rather than for his community, and here he employed his distinctive style, avoiding highfalutin language in favor of simplicity and directness.”

“In his campaign announcement of 1832, Lincoln had told the people of Sangamon County that his chief desire was to be ‘esteemed of my fellow men, by rendering myself worthy of their esteem.’ In a brief two years, Lincoln’s abilities and experiences began to coalesce into his gifts of leadership. His intellectual curiosity had pushed beyond the romantic and religious classics he read in his Indiana years to Enlightenment authors who offered critiques of religion. Now feeling at home after living three years in New Salem, he was beginning to find his own voice, not just around the fireside at the country store, but in campaigning in the countryside beyond the little town, where he was known for his clearheaded thinking, whimsical storytelling, and self-deprecating humor. Lincoln’s ambitions for public service were about to be tested and shaped in the larger arena of the Illinois Ninth General Assembly.”

“In his 1832 campaign announcement, Lincoln above all championed government support for internal improvements which would enable subsistence farmers to participate in the market economy and thus escape rural isolation and poverty … Lincoln’s ambition, like that of many politicians, was rooted in an intense craving for deference and approval. But unlike many power-seekers, Lincoln was expansive and generous in his ambition. He desired more than ego-gratifying power and prestige; he wanted everyone to have a chance to escape the soul-crushing poverty and backwardness that he had experienced as a quasi-slave on the frontier.”