“If we could first know where we are….” 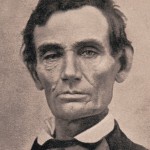 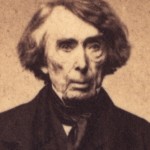 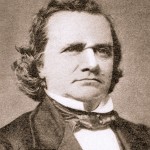 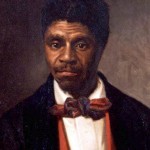 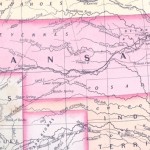 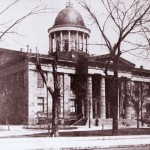 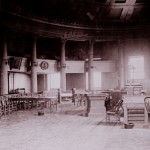 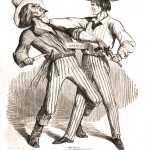 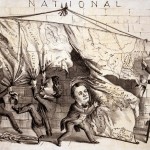 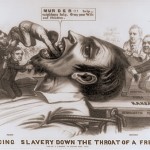 “Lincoln’s other prediction – regarding a second Dred Scott decision – was not far- fetched.197 The Bloomington Pantagraph had mentioned the possibility of a second Dred Scott case less than a week after the Supreme Court ruled in the first one.198 Lincoln was probably alluding to Lemmon vs. the People, a case which had begun in New York in 1852 and dealt with the right of slaveholders to take their chattels with them into Free States. In 1841, the New York legislature had overturned an earlier statute permitting slave owners to visit the Empire State accompanied by slaves for temporary sojourns. The new law stipulated that “no person imported, introduced or brought into this State” could be held in bondage. In October 1857, it was argued before the New York Supreme Court, which upheld the statute by a 5-3 vote. As the case was being considered by the state’s Court of Appeals, opponents of slavery feared that it would eventually come before the U.S. Supreme Court, where Taney and his colleagues might overrule New York’s statute and pave the way for nationalizing slavery. The case was pending in 1858 and not argued before the New York Court of Appeals until 1860.”

“Attracting national attention, Lincoln’s house-divided speech sounded very radical.  Advanced five months before William H. Seward offered his prediction of an ‘irrepressible conflict’ between slavery and freedom, it was the most extreme statement made by any responsible leader of the Republican party.  Even Herndon, to whom Lincoln first read it, told his partner: ‘It is true, but is it wise or politic to say so?’  Lincoln’s other advisers condemned it, especially deploring the house-divided image and saying ‘the whole Spirit was too far in advance of the times.’  As the editor John Locke Scripps explained, many who heard and read Lincoln’s speech understood it as ‘an implied pledge on behalf of the Republican party to make war upon the institution in the States where it now exists.'”

“As a senatorial candidate in 1858, Lincoln fought Douglas on ground of the incumbent senator’s own choosing: the legitimacy of popular sovereignty as a republican principle. Lincoln’s acceptance came in the famous ‘House Divided’ speech. By the time Lincoln spoke, both antislavery and proslavery writers had used the metaphor of the house divided to argue that the United States could not be both free and slave.  One premise of Douglas’s popular sovereignty, of course, was that it could be both. Lincoln not only rejected that premise, he questioned Douglas’s sincerity in asserting it, arguing that Douglas really intended to nationalize slavery . . . ‘Popular Sovereignty, as now applied to the question of slavery, does allow the people of a Territory to have slavery if they want to, but does not allow them not to have it if they do not want it.’”

“So did the charges that Republicans were disunionists. At times Lincoln fed those allegations; his House Divided speech forecast the nation split in two and division made imperative because either freedom or slavery must triumph. But the future president was quick to deny that accusation. What was at stake, he claimed, was a struggle for the minds of men over the question of whether slavery or freedom controlled the territories and hence the future. It was a debate that would be resolved not with invasion or threat, but through the political discourse that would lead the people and their government toward their original idealism. That reassurance actually only promised Dixie a slow death for slavery if people like Lincoln won office. But it did suggest how a healthy political-constitutional process could bring to life the Declaration’s egalitarian promise. That too pushed Lincoln toward redefining the meaning of 1776.”

Mr. PRESIDENT and Gentlemen of the Convention.
If we could first know where we are, and whither we are tending, we could then better judge what to do, and how to do it.
We are now far into the fifth year, since a policy was initiated, with the avowed object, and confident promise, of putting an end to slavery agitation.
Under the operation of that policy, that agitation has not only, not ceased, but has constantly augmented.
In my opinion, it will not cease, until a crisis shall have been reached, and passed.
“A house divided against itself cannot stand.”
I believe this government cannot endure, permanently half slave and half free.
I do not expect the Union to be dissolved—I do not expect the house to fall—but I do expect it will cease to be divided.
It will become all one thing, or all the other.
Either the opponents of slavery, will arrest the further spread of it, and place it where the public mind shall rest in the belief that it is in course of ultimate extinction; or its advocates will push it forward, till it shall become alike lawful in all the States, old as well as new—North as well as South.
…We shall lie down pleasantly dreaming that the people of Missouri are on the verge of making their State free; and we shall awake to the reality, instead, that the Supreme Court has made Illinois a slave State.
To meet and overthrow the power of that dynasty, is the work now before all those who would prevent that consummation.
That is what we have to do.
But how can we best do it?
There are those who denounce us openly to their own friends, and yet whisper us softly, that Senator Douglas is the aptest instrument there is, with which to effect that object. They do not tell us, nor has he told us, that he wishes any such object to be effected. They wish us to infer all, from the facts, that he now has a little quarrel with the present head of the dynasty; and that he has regularly voted with us, on a single point, upon which, he and we, have never differed.
They remind us that he is a very great man, and that the largest of us are very small ones. Let this be granted. But “a living dog is better than a dead lion.” Judge Douglas, if not a dead lion for this work, is at least a caged and toothless one. How can he oppose the advances of slavery? He don’t care anything about it. His avowed mission is impressing the “public heart” to care nothing about it….
… Now, as ever, I wish to not misrepresent Judge Douglas’ position, question his motives, or do ought that can be personally offensive to him.
Whenever, if ever, he and we can come together on principle so that our great cause may have assistance from his great ability, I hope to have interposed no adventitious obstacle.
But clearly, he is not now with us—he does not pretend to be—he does not promise to ever be.
Our cause, then, must be intrusted to, and conducted by its own undoubted friends—those whose hands are free, whose hearts are in the work—who do care for the result.
Two years ago the Republicans of the nation mustered over thirteen hundred thousand strong.
We did this under the single impulse of resistance to a common danger, with every external circumstance against us.
Of strange, discordant, and even, hostile elements, we gathered from the four winds, and formed and fought the battle through, under the constant hot fire of a disciplined, proud, and pampered enemy.
Did we brave all then,  to falter now?—now—when that same enemy is wavering, dissevered and belligerent?
The result is not doubtful. We shall not fail—if we stand firm, we shall not fail.  Wise councils  may accelerate or mistakes delay it, but, sooner or later the victory is sure to come.
Tagged with: Antebellum, Dred Scott Case, Kansas-Nebraska Act, Partisanship, Public, Slavery, Speech, Stephen A. Douglas, Younger Readers
Posted in Great Emancipator
Lincoln’s Writings
Understanding Lincoln Online Course