“I hold, that in contemplation of universal law….” 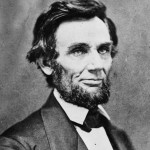 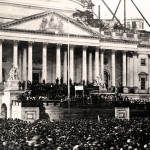 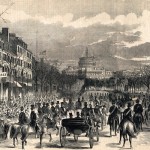 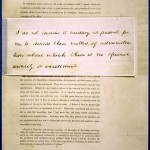 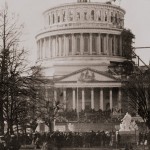 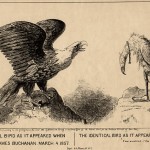 Boston Daily Advertiser, “What is Said of the Inaugural,” March 6, 1861

“The audience could not be quite sure what the new President’s policy toward secession would be because his inaugural address, like his cabinet, was an imperfectly blended mixture of opposites.  The draft that he completed before leaving Springfield was a no-nonsense document; it declared that the Union was indestructible, that secession was illegal, and that he intended to enforce the laws . . . Seward thought the speech much too provocative.  If Lincoln delivered it without altercations, he warned, Virginia and Maryland would secede and within sixty days the Union would be obliged to fight the Confederacy for possession of the capital in Washington.  Dozens of verbal changes should be made, deleting words and phrases that could appear to threaten ‘the defeated, irritates, angered, frenzied’ people of the South.  Something more than argument was needed ‘to meet and remove prejudice and passion in the South, and despondency  and fear in the East.'”

“Lincoln’s words were so blunt, so unapologetic that his incoming secretary of state, William Seward, urged him to end on a more conciliatory note. Ironically, it is that final note that has come down through history as among Lincoln’s most eloquent perorations… But the coda could not undo the content. Lincoln’s speech was unstinting in its determination to suppress the slaveholders’ ‘insurrection.’ It seemed to be aimed less at persuading the South to abandon secession than at persuading the North to resist it. When Lincoln reiterated that he would not touch slavery in the southern states, he was speaking, at least in part, to a northern electorate that had no taste for an abolition war. By positioning the North as the defender of the Union rather than as the invader of the South, Lincoln could not have believed he would persuade the secessionists, but he surely hoped to stiffen the North’s determination to uphold the Union at whatever cost.”

…I hold, that in contemplation of universal law, and of the Constitution, the Union of these States is perpetual. Perpetuity is implied, if not expressed, in the fundamental law of all national governments. It is safe to assert that no government proper, ever had a provision in its organic law for its own termination. Continue to execute all the express provisions of our national Constitution, and the Union will endure forever—it being impossible to destroy it, except by some action not provided for in the instrument itself….
…It follows from these views that no State, upon its own mere motion, can lawfully get out of the Union,—that resolves and ordinances to that effect are legally void;  and that acts of violence, within any State or States, against the authority of the United States, are insurrectionary or revolutionary,  according to circumstances.
I therefore consider that, in view of the Constitution and the laws, the Union is unbroken; and, to the extent of my ability, I shall take care, as the Constitution itself expressly enjoins upon me, that the laws of the Union be faithfully executed in all the States. Doing this I deem to be only a simple duty on my part; and I shall perform it, so far as practicable, unless my rightful masters, the American people, shall withhold the requisite means, or, in some authoritative manner, direct the contrary. I trust this will not be regarded as a menace, but only as the declared purpose of the Union that it will constitutionally defend, and maintain itself.
In doing this there needs to be no bloodshed or violence; and there shall be none, unless it be forced upon the national authority. The power the confided to me, will be used to hold, occupy, and possess the property, and places belonging to the government, and to collect the duties and imposts; but beyond what may be necessary for these objects, there will be no invasion—no using of force against, or among the people anywhere….
… Plainly, the central idea of secession, is the essence of anarchy. A majority, held in restraint by constitutional checks, and limitations, and always changing easily, with deliberate changes of popular opinions and sentiments, is the only true sovereign of a free people. Whoever rejects it, does, of necessity, fly to anarchy or to despotism. Unanimity is impossible; the rule of a minority, as a permanent arrangement, is wholly inadmissable; so that, rejecting the majority principle, anarchy, or despotism in some form, is all that is left….
…One section of our country believes slavery is right, and ought to be extended, while the other believes it is wrong, and ought not to be extended. This is the only substantial dispute. The fugitive slave clause of the Constitution, and the law for the suppression of the foreign slave trade, are each as well enforced, perhaps,  as any law can ever be in a community where the moral sense of the people imperfectly supports the law itself. The great body of the people abide by the dry legal obligation in both cases, and a few break over in each. This, I think, cannot be perfectly cured; and it would be worse in both cases after the separation of the sections, than before. The foreign slave trade, now imperfectly suppressed, would be ultimately revived without restriction, in one section; while fugitive slaves, now only partially surrendered, would not be surrendered at all, by the other.
Physically speaking, we cannot separate. We cannot remove our respective sections from each other, nor build an impassable wall between them. A husband and wife may be divorced, and go out of the presence, and beyond the reach of each other; but the different parts of our country cannot do this. They cannot but remain face to face; and intercourse, either amicable or hostile, must continue between them. …
… My countrymen, one and all, think calmly and well, upon this whole subject. Nothing valuable can be lost by taking time.  If there be an object to hurry any of you, in hot haste, to a step which you would never take deliberately, that object will be frustrated by taking time; but no good object can be frustrated by it. Such of you as are now dissatisfied, still have the old Constitution unimpaired, and, on the sensitive point, the laws of your own framing under it; while the new administration will have no immediate power, if it would, to change either. If it were admitted that you who are dissatisfied, hold the right side in the dispute, there still is no single good reason for precipitate action. Intelligence, patriotism, Christianity, and a firm reliance on Him, who has never yet forsaken this favored land, are still competent to adjust, in the best way, all our present difficulty.
In your hands, my dissatisfied fellow countrymen, and not in mine, is the momentous issue of civil war. The government will not assail you.  You can have no conflict, without being yourselves the aggressors. You have no oath registered in Heaven to destroy the government, while I shall have the most solemn one to “preserve, protect and defend” it.
I am loth to close. We are not enemies, but friends. We must not be enemies. Though passion may have strained, it must not break our bonds of affection. The mystic chords of memory, stretching from every battle-field, and patriot grave, to every living heart and hearthstone, all over this broad land, will yet swell the chorus of the Union, when again touched, as surely they will be, by the better angels of our nature.
Tagged with: Antebellum, Borrowed Phrasing, Founders, Nationalism, Public, Secession, Speech, Younger Readers
Posted in Savior of the Union
Lincoln’s Writings
Understanding Lincoln Online Course