Context.  Abraham Lincoln grew up in what we call today a blended family. His mother Nancy died when his sister Sarah was eleven and he was only nine. Lincoln’s father Thomas then remarried to a widow named Sarah Bush Johnston who had her own children and the families merged together in on a small farm in southern Indiana. That was how Lincoln grew up until the extended clan relocated to Illinois in the early 1830s. In this letter, Abraham Lincoln explained to his step-brother John Johnston why he had not replied to earlier letters warning of his father’s ill health and why he had decided not to come and visit. The content and tone of the letter suggests that there might have been serious strains in the relationship between father and son. Thomas Lincoln died a week after this letter was written. (By Matthew Pinsker)

“I sincerely hope Father may yet recover his health….” 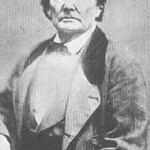 “When Lincoln finally replied to Johnston on January 12, 1851, it was to express a polite but firm unwillingness to make the trip down to Coles County. Mary was still unwell from the birth of William Wallace Lincoln, and, even more to the point, the distance between father and son had simply grown too great to be reconciled, even if the old man was at death’s door. ‘If we could meet now,’ Lincoln told Johnston, ‘it is doubtful whether it would not be more painful than pleasant.’ And almost as if this mysterious inability to find reconciliation with his father reminded Lincoln of another equally painful inability, he dropped back into language from his boyhood which he must have known would be the substance of his father’s religious hopes but which he could only acknowledge as a distant impossibility for himself:… It is hard to imagine the ‘infidel’ of the 1830’s writing such advice, even if it was (as Herndon insisted it only was) designed largely as the dutiful sentiment a tactful but distant son might be expected to offer a dying father. Mixed up together with the sentimentality are all the old echoes of the Lincoln family’s unbending Calvinism; and of Christian redemption. What he was willing to acknowledge as grace for others he could not acknowledge for himself. It was ‘the help of God’ the predestinating Father, not the mediation of Christ the redeeming Son, which was the best Lincoln could offer.”

“The following year, Lincoln’s father passed away. As Thomas lay dying in Charleston, a day’s journey from Springfield, Lincoln rejected his deathbed appeal for a visit. Coldly Lincoln wrote his stepbrother, John D. Johnston, to tell their father ‘that if we could meet now, it is doubtful whether it would not be more painful than pleasant.’ Lincoln neither attended Thomas’s funeral nor arranged for a tombstone to mark his grave. In some men, the painful questioning that often occurs at midlife can lead to despair; in others it produces stagnation. But it can also be a creative if turbulent period in which inner psychological growth takes place and leads to profound self-realization. Out of the crucible of midlife introspection can emerge an awareness of one’s own identity and uniqueness that breeds self-confidence and inspires confidence in others. A hallmark of such pyschologically maturity is an ability to overcome egotism, to avoid taking things personally, to accept one’s shortcomings and those of others with equanimity, to let go of things appropriate for youth and accept gladly the advantages and disadvantages of age. People able to meet these challenges successfully radiate a kind of pyschological wholeness and rootedness that commands respect. They evolve into the unique individuals that they were meant to be. Clearly Lincoln became such a person.”

“The next winter, when John D. Johnston wrote him two more letters about Thomas Lincoln’s declining health, Abraham Lincoln did not respond. He thought his stepbrother was again crying wolf. Only after he heard independently from Harriet Chapman did he take the news seriously. Repeating his ‘desire that neither Father or Mother shall be in want of any comfort either in health or sickness,’ he explained why he could not come to his father’s sickbed. ‘My business is such that I could hardly leave home now,’ he wrote; besides, his wife was ‘sick-abed’ with ‘baby-sickness.’ Both excuses had some plausibility … The rest of Lincoln’s letter, urging his father to ‘call upon, and confide in, our great, and good, and merciful Maker; who…notes the fall of a sparrow, and numbers the hairs of our heads,’ was in unconvincing and strained language, really addressed to his backwoods relatives who thought in the cliches of Primitive Baptists … Unable to simulate a grief that he did not feel or an affection that he did not bear, Lincoln did not attend his father’s funeral. He was not heartless, but Thomas Lincoln represented a world that his son had long ago left behind him.”

Springfield, Jany. 12. 1851—
Dear Brother:
On the day before yesterday I received a letter from Harriett, written at Greenup. She says she has just returned from your house; and that Father is very low, and will hardly recover. She also says you have written me two letters; and that although you do not expect me to come now, you wonder that I do not write. I received both your letters, and although I have not answered them, it is not because I have forgotten them, or been uninterested about them—but because it appeared to me I could write nothing which could do any good. You already know I desire that neither Father or Mother shall be in want of any comfort either in health or sickness while they live; and I feel sure you have not failed to use my name, if necessary, to procure a doctor, or any thing else for Father in his present sickness. My business is such that I could hardly leave home now, if it were not, as it is, that my own wife is sick-abed. (It is a case of baby-sickness, and I suppose is not dangerous.) I sincerely hope Father may yet recover his health; but at all events tell him to remember to call upon, and confide in, our great, and good, and merciful Maker; who will not turn away from him in any extremity. He notes the fall of a sparrow, and numbers the hairs of our heads; and He will not forget the dying man, who puts his trust in Him. Say to him that if we could meet now, it is doubtful whether it would not be more painful than pleasant; but that if it be his lot to go now, he will soon have a joyous [meeting] with many loved ones gone before; and where the rest of us, through the help of God, hope ere-long to join them.
Write me again when you receive this.
Affectionately
A. LINCOLN
Tagged with: Antebellum, Consolation, Family, Letter, Private, Religion, Younger Readers
Posted in The Railsplitter
Lincoln’s Writings
Understanding Lincoln Online Course